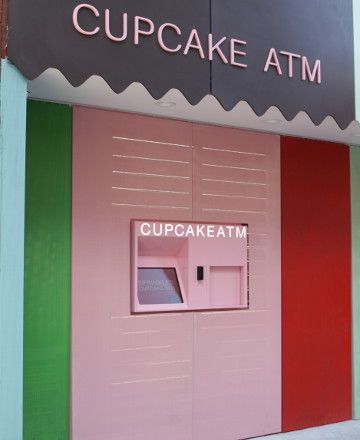 How cool would it be to have an ATM machine that not only withdraws money but…other things?? Well, for sweets and cupcake lovers in New York City like myself, that Sweet Transaction is very much a reality.

The Cupcake ATM is the first to ever be created by Sprinkles Cupcakes. The first Cupcake ATM launched March 6, 2012 in Beverly Hills. With six locations in the United States, including NEW YORK CITY, The Cupcake ATM dispenses freshly baked cupcakes 24/7.

The Cupcake ATM is sure to satisfy the cupcake lover on the go and those late night cravings for something sweet. There are even cupcakes for your pooch.

My NIGHT experience at the Cupcake ATM was nonetheless a “foodie’s fantasy”.  The process is rather quick as well.  The mad rush to the ATM seems to be during the day as opposed to the evening. 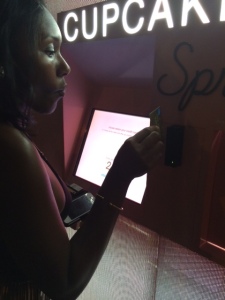 The experience is great for all ages.  The taste of the cupcake is beyond amazing.  I would have had a picture of the red velvet cupcake I selected, but the way my belly was set up… *burps*

Check out the video on how the Cupcake ATM process works by Sprinkles Cupcakes founder Candace Nelson:

The GlamMaverick wants to know IF YOU CAN HAVE 24-HOUR ACCESS TO ANYTHING VIA ATM, WHAT WOULD IT BE AND WHY?

Can’t wait to hear your answers!!

One thought on “The Sweetest Transaction”